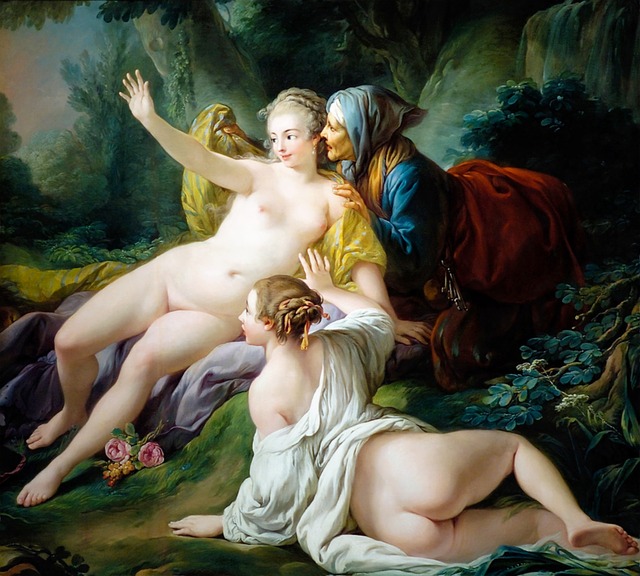 Nudity has been a part of art for almost as long as people have made it.

The artist’s nude body provided him greater freedom to depict emotions like tension, wrath, strength, desperation, and movement. The sculptures have a sensation of movement thanks to taut muscles, protruding veins, a twisted torso, sinewy legs, and a ribbed stomach. The exaggerations also revealed the represented character’s mental condition. One of the most well-known sculptures is the Laocoon Group, which depicts the Greek legendary figure Laocoon and his sons. The sculptor employs the nude body to express the father and sons’ fight with a snake. The sculptor depicts the struggle, misery, fear, and rage via the use of nude bodies. Sculptures such as Laocoon influenced Renaissance painters such as Michelangelo to adopt the same naked body approach in his paintings to inspire the audience with religious and mythological stories. Images eventually adopted sculptors’ ‘nude method’ to bring a scene or tale to life with emotion. The study of the nude (at first, male nudes) quickly became an essential aspect of an artist’s education. Students of art studied not just naked male models but also classical sculptures that depicted how an ideal nude figure might be represented. It is commonly known that Da Vinci dissected and analysed cadavers in his quest to improve the human muscle and skeletal system.

The real creative skill and the vehicle for a wide variety of emotions are mastering painting of the human body. Unlike painting a clothed person, painting a nude image necessitated precise command of skin tone, a thorough understanding of the skeletal and muscular structure, proportional alignment of various body components, and alignment of the body to the surroundings and other characters.

“I wanted to concentrate all of my efforts into the toughest difficulty a painter can face,” says American artist Jacob Collins* of the difficulties of painting nudes. Nothing is more difficult to paint than this. The most difficult task is to paint a figure plainly and, with beauty and strength, to express the humanity inside the individual via their outward form. Jump into the world of the great figure painters of the past by painting with the talents of previous masters while yet feeling fresh, by painting anatomical shapes that feel alive, by painting a head that feels full of ideas.”

When representing God and Goddesses from mythology, nudity was frequently used to emphasise the values of valour, bravery, and courage in male nudes and beauty, coyness, and fertility in female nudes. Artists sometimes utilised these depictions to generate a sense of divinity and innocence in viewers’ minds. Although nudity became associated with shame and humiliation following the spread of Christianity in the west, this was gratefully abolished by the Renaissance resurgence. Nudes depicting frivolous or lighthearted sensuality were popular during the Rocco and Baroque eras. Rubens’ seductive female nudes were carefree and sensual. This topic was also featured in paintings by Degas, Manet, and others. The nudist females in these paintings added a lighthearted tone to the scenes, such as a group swimming scene or a picnic. It represented the whole set’s joy of life attitude.

Scroll back to top